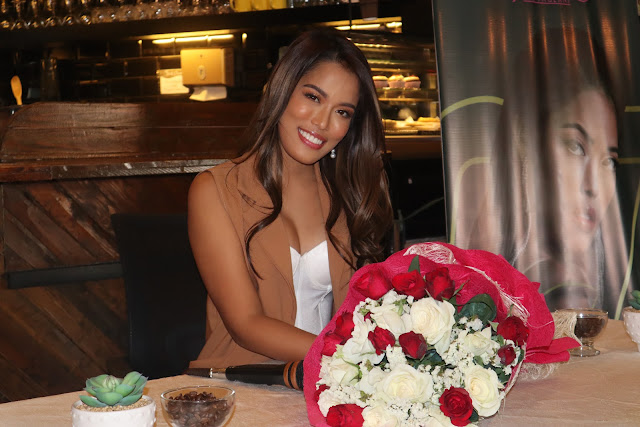 The 25 year old beauty is not your ordinary beauty queen. Just like any queens, she is tall, beautiful and brainy. What makes her stand out to others is her passion of being independent, brave, and passionate in everything that she does.

Gila met some members of the press last February 22 at Madcafe PH in Congressional Avenue, Quezon City. While interacting with us, I found out some interesting facts about here.

She did not pursue her undergraduate studies in Ateneo De Manila University at the age of 17 while taking up Business Management. She pursued her passion in business. She owns a construction firm and interior design firm that designed some celebrity houses. She also owns Madcafe and will open soon her hotel in Siargao.

2. Earned seven-digit income at the age of 18

She chose to leave school when she was 17 and start her own business. This leap of faith earned her first seven-digit income at age 18.

What was her secret in earning that million?


Can't believe the support from you guys! 100k Subs and on the facebook page (almost!) Grateful for everyone and I'll do my best to keep posting vlogs for all of you. Stay tuned on my facebook page where I'll announce the winner of my makeover giveaway!! #vlogger #youtuber
A post shared by Gila Salvador (@gilasalvador) on Jul 15, 2019 at 6:01am PDT

Her father who is an architect motivates her to join Bb. Pilipinas.

“Last December (2019), we were just had a conversation in the dinner table and someone said Gila you can join Bb. Pilipinas. Then my Dad was saying, oo nga noh,” the beauty queen shared to the press.

“At first it was all his first idea. Along the way I started to realize na I think I might want to join. I actually prayed for it muna. I prayed for it if I something that I really want to do. Somehow God told me na, yes try mo. I will try until screening, If I don’t get it, it’s not for me. If I get in, maybe you have a purpose for me.”


“After screening, I found that purpose. Nung natanggap ako, I received hundred of messages from my followers and subscribers telling me that they were so inspired and even though I am doing so well in life already, I chose to do something that is a new challenge for me”.

“There was this one follower saying na ‘I was depressed and watching all your videos and everything that you do in Instagram stories made me get rid of my depression and made me fight for my life’.”

She is a no-ordinary woman. She’s a handy-woman, trained and grew up like a man that was showed in her talent during Bb. Pilipinas 2020 talent competition last February 14.

In her Youtube channel, she shared how she prepared for the talent competition. She created an art piece on stage using power tool.


Fun fact: The first power tool I ever learned to use was a drill when I was 14. I always used to watch my dad work in the garage with all his tools and that I would ask him what each was for, and he was so eager to teach and develop me, that I turned into a handy woman. I guess that’s why I can’t cook, cause I spent more time in the garage watching my dad, than in the kitchen watching my mom. 😅 #GilamakingBBPhappen #GilaforBBP2020 #Gila37BBP2020 #BBPilipinas2020 #BinibiningPilipinas2020 #KagandahangFlores #KF #KFamilia #CrownGloryLegacy #IamBinibini
A post shared by Gila Salvador (@gilasalvador) on Feb 16, 2020 at 4:57am PST


“Despite it being a little unconventional, I decided to combine all the skills I know to create an art piece. Which is using power-tools, painting and even strategic and creative planning for the entire set and a little bit of dancing.” she said.

5. Advocates for self reliance and independence

Her allowance in college was not enough. She chose not to rely on her parents and not to ask them for more money. Instead, she stand up for herself, take charge and do something about her situation.

“I choose self reliance and independence. I am not even sure if anyone has ever done this before kasi ever since I started business, this is the only thing I’ve been sharing and passionate about.”


“I want to get away from the poverty mentality: that is if someones poor, you have donate to them and if someones in trouble, you have to find solution for them. Self reliance and independence gives you the self-empowerment to find your own solution, to be your own help, to be your own savior. That is something that I want to show to everyone.”

Bb. Pilipinas 2020
Representing Nueva Ecija, Gila is competing with other 39 candidates of Bb. Pilipinas 2020. Coronation night is on April 26 at the Smart Araneta Coliseum. You can follow her in Instagram and subscribe to her Youtube channel.