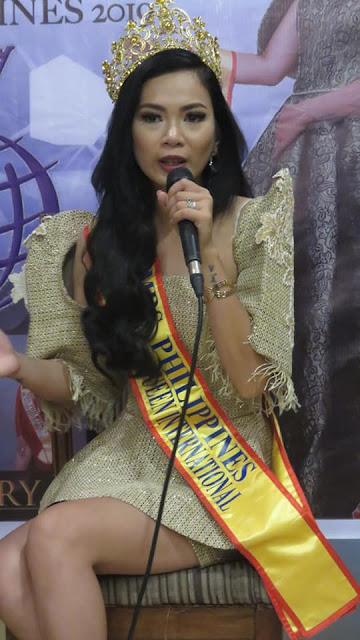 Hello Ladies! Another Beauty Queen is now off to compete to get the crown for our country and let's all support Janina Cariz Kurihara this coming December 7 2019 for Mrs. Tourism Queen International.

I was honored to be part of her send off press conference a few days ago at Kowloon House at West Avenue and was able to know a lot more about this stunning 27 year old mother of two cute daughters. As she had won, Mother Ovette Ricalde guided Janina as he had known her prior as a professional make up artist too and had seen her potential and encouraged her to join and luckily she won the title and now in Thailand to represent our country for the Mrs. Tourism Queen International.

Born and raised in San Mateo, Rizal Janina was exposed to pageantry thru her love of make up and had done make up artistry for beauty queens and had learned so much from her clientele too. She also studied bachelor of arts major in English and has worked as a teacher for elementary and high school students which led her to her advocacy for education for the youth.

She has an initiative to help her community and promotes discipline which will definitely help boost our tourism here in the Philippines.

She also plans to launch "Discover and Learn" which is an initiative where kids from different barangays will be able to watch educational materials and documentaries from Discovery Channel and National Geographic. I do like this initiative she has because personally I grew up watching from those channels too as a young child encouraged by my father and mother because you will learn so much from these and the visual stimulation improves a child's creativity and expands their knowledge of the world around them.

And according to Janina, she plans on donating television sets and projectors once she gets home, may she get the crown or not because education is very important to her and she also wants to impart that on the young minds of our country.

I was also able to ask her about her preparation for the pageant which was intensive for her since she had quite a short time preparing but luckily with her team behind her all the way she was able to train and prepare despite the short time. She also had to have intensive therapy for her milk scoliosis to be able to do well on the pageant and I am very surprised that she has that but she showed grace and flexibility all throughout the press conference.

Best of Luck to you Janina from us at Entertainment News Portal!