Mr. World Philippines 2018: Who is the PH's Most Desirable Man? 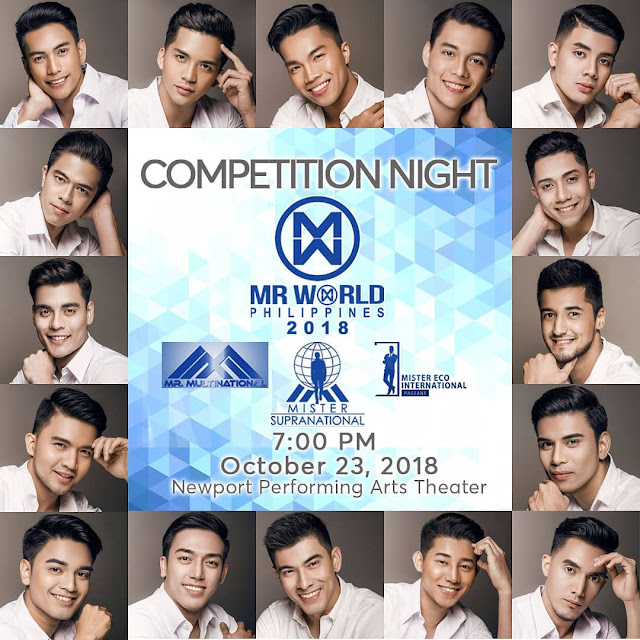 
MANILA, Philippines - Sixteen of the most desirable men from all over the country were presented to the members of media during the Mr. World Philippines 2018 press presentation held at Resorts World Manila last September 4, 2018.
Hosted by Mr. Arjay Ledesma, the event started with an opening remarks coming from one of the big bosses of Resorts World Manila, Mr. Joey Guilas in which he emphasized the partnership of Resorts World Manila to Mr. World Philippines and the Vision of Resorts World which is “To Thrill the World Every Chance We get”.
Mister World Philippines National Director, Mr. Arnold Vegafria, also delivered his message before the official presentation of the 16 official candidates of Mr. World Philippines 2018.
During the presentation, some of this year’s candidate caught the attention of the press people, media man, and pageant bloggers.
Let’s have a run through of the candidates who made a great impression.
First is Denver Hernandez. Denver is a pageant veteran who holds several pageant titles before. He works as a Financialadviser at AXA Philippines and is on his way of building his own business. He mentioned during our  interview that he has a lot of body preparation for the competition and he wanted to look fresh. He also lessen his modeling stints to focus on the competition. He said that his advocacy is not by word, but by actions. Will Mr. World Philippines be the next title for Denver?

Second is the charming Mark Comiso. Mark is a graduate of BSIT at FEU Diliman and is a pageant newbie however; he is not new to the television scene. He is a GMA talent and appersas “kawal” in the fantaserye, Encantadia. His main reason of joining Mr. World Philippines is to gain exposure and penetrate the showbizness. He also admits, during our interview, that he needs to focus on his communication skills. His advocacy will be focusing on Physical Fitness. Will this star aspirant be the next Mr. World Philippines?

Third on the list is Abdullah Sharif Cheng. Abdullah is a Mechanical Engineering student of FEU Manila and is a consistent topnotch of his class. This half Middle-Eastern, half Filipino debonair is doing a lot of body preparation for the competition. He also read books and focuses on the local current events. He mentioned that he is a survivor of war in Yemen that’s why his advocacy focuses on children victims of war, child refugees and poor children that really needs help. He promised us that if he wins, he will be strongest candidate of Mister World 2018. Will this inspiring gentleman continue to inspire as he will be crowned Mr. World Philippines 2018?


The fourth gentleman on the list is Ameen Sardouk. This towering student athlete is a healthy lifestyle advocate. He mentioned on our interview that he wanted to focus on his weakness, his communication skills, and by reading articles and learning’s in life, he believes that he will overcome it. Will this health advocate create an impact and win the Mr. World Philippines 2018 title?

The fifth gentleman to fall in love with is Ricardo De Jesus. Ricardo is a Marketing Manager of an IT Comnpany and is currently taking his MBA at Ateneo De Manila Univerisity. Extensive gym work-out and diet is his preparation for the contest. His advocacy focuses on Empowering the youth, he wants the youth to have jobs and be more productive. His biggest challenge is to do his very best and be the best representative of Mr. World Philippines. Will this influential guy continue to influence more as he was crowned as Mr. World Philippines?

The sixth gentleman to charm the crowd is Joshua Reginald Banatin. Josh is the 4th Runner-Up of Mr. Grand International 2017. This Tourism graduate of Laguna State Polytechnic University is a host and a model on both commercials and print ads. Joshua said that he is not getting any younger that’s why he decided to join Mr. World Philippines 2018. He is doing a lot of intensify efforts because he believes that he still needs improvements particularly on his body. As a tourism graduate, his advocacy focuses on the Eco-Tourism of the Philippines because he believes that our country has a lot to offer. He also said that he is very obsessed on winning the Mr. World Philippines 2018. He is imagining that his name is being called as the winner. Will this charming host/speaker be hailed as Mr. World Philippines 2018?

The seventh gentleman to catch the attention of everyone is the tallest candidate this year, Marco Poli. Marco’s strength is his height and body. He said that it is his dream to represent the country in an international pageant that’s why he joined Mr. World Philippines 2018. Even if he has a good body built, he still insists to improve and continue to train himself physically and mentally. Will this gentle giant be the most desirable man this 2018?Last but d

Definitely not the least is JB Saliba. JB is a graduate of Sports Science at the University of the Philippines-Diliman. He mentioned that he has a great passion to sports that even when he was still a kid, he get to involve into sports. However, he is now on his way of reaching his dream of becoming a pilot. Will this athletic dude soar high and be the most desirable man of 2018?