Hail to the New Kings! Meet the winners of Mr. World Philippines 2018 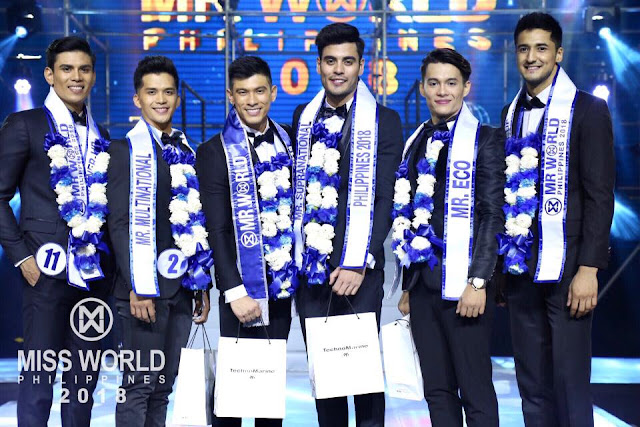 Last October 23, sixteen of the most desirable men of the country fought to prove that they deserve to be hailed as Mr. World Philippines 2018 at Newport Performing Arts Theater.
Hosted by Miss World Philippines 2017 Laura Lehman and RJ Ledesma, the show started with a very Mr. World production number and introduction of the official candidates.
During the swimsuit round of the competition, the candidates didn’t fail to show that they are not only physically fit and attractive but, they are desirably confident and sexy.
The first set of special awards and the first fast track winner was announced after the swimsuit round. Candidate #14 JB Saliba bagged the Best Skin and the Bench Body award. Candidate #4 Robin Hanrath was awarded as the most photogenic. Mr. Gamboa Coffee award was given to candidate #8 Marco Poli. Mr. Bench was given to candidate #2 Denver Hernandez. Denver was also declared as the Sports Challenge winner making him automatically advance to the top 8 semi-finalists.
In the formal wear round, the candidates proved that they are not just the most handsome gentlemen of the night but they are the most desirable men that anyone could not resist to watch for.
The second set of special award and the second fast track winner was announced after the formal wear round. Mr. Blue Water Day Spa and Mr. Techno-marine was given to candidate #14 JB Saliba. Mr. Multimedia was given to candidate #2 Denver Hernandez. The Best in Formal Wear was awarded to candidate #8 Marco Poli. The winner of the Talent Fast Track winner which automatically advance to the top 8 semi-finalist was won by candidate #7 Joy Jerome Evangelista.
The competition continues with the announcement of the top 8 semi-finalists. Candidate #2 Denver Hernandez and candidate #7 Joy Jerome Evangelista secured their spot by winning the fast track events. Completing the circle of 8 were candidate #8 Marco Poli, candidate #14 JB Saliba, candidate #4 Robin Hanrath, candidate #6 Adullah Sharif Cheng, candidate #11 Wilfred Placencia and candidate #9 Ameen Sardouk.
The Top 8 semi-finalists took the most challenging round of the night, the Q & A Round. All 8 semi-finalists gave a great and confidently convincing response to the questions given to them leaving a challenge to the judges in determining the winners.

As announced by the National Director of Mr. World Philippines, Arnold L. Vegafria, Mr. World 2018 will be held here in Manila sometime on March 2019.
It is truly to be considered a milestone to celebrate the success of the very first Mr. World Philippines competition. Hail to the New Kings! - by Gregory Dale Medina