MANILA -- Comedy concert queen Ai-ai delas has been a trusted name by the big brands and companies in the Philippines. She just signed an endorsement deal with Bulalo World last August 4 at Bulalo World branch in Ayala Mall Feliz, Pasig City.

“We would like to welcome Ms. Ai and thank you for your generous acceptance dito sa pag endorse ng Bulalo World. About three and a half years ago, Bulalo World has born. Medyo bata pa po ang brand na ito but truly we have big plans”, Bulalo World President Gil Nemeno said to the press.

Nemeño hopes that with the Tanging Ina star’s endorsement, Bulalo World brand will be successful.

“I was trying to read the story of Ms. Ai.  She started as saleslady for Cinderella. The feeling of Ms. Ai having started as a saleslady and now a truly big star. The fame and celebrity status of Ms. Ai is something that we’d wish will be continuous enough to bring also Bulalo World. We believe that with Ms. Ai’s, Bulalao World will be the next success story in the fast-food industry. We believe that this contract signing is just the first phase of our dream of becoming truly a success,” Nemeño added. 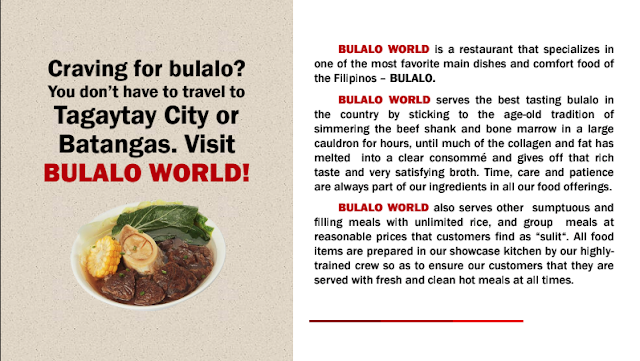 Prior signing the contract, delas Alas sought advise from her son since their family has a restaurant business too named ‘Ai Sarap Express’. She confirmed that Bulalo World has no conflict with her own restaurant since they cater different markets.

Bulalo would not be complete without bone marrow. As confirmed by Nemeño, they imported bones from Argentina, France and Ireland.

For those who are craving for bulalo, you don’t have to go to Tagaytay. Just visit their 25 branches in Metro Manila. For more information, just visit their official Facebook account.